Embracing Ambiguity: Why Scrapping Plans is a Healthy Process

How I Learned to Stop Worrying and Love the Uncertainty

She was looking up at me, clearly irritated. “I’m just putting the pieces where you tell me to put them.”

I was witnessing one of my first failed lessons. Epic fail. Having just launched my first week of Electric Girls summer camp, I had concocted the “perfect” project for my electronics, audio, and computer science focused camp for girls. We would build a Drawdio – a pencil that essentially produces sound depending on the amount of resistance in the circuit; the girls would learn to solder, learn to identify various electronic components, and learn how audio works! Seemingly cohesive, seemingly perfect. 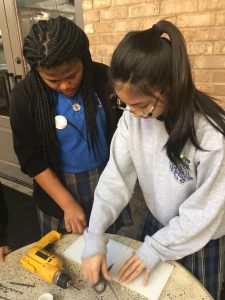 Until the girls told me that they felt like monkeys. And after listening, I got what they were saying. The Drawdio was invented by folks over at MIT. Not Electric Girls. The success and triumph of getting the Drawdio to work truly lies with those who created it  – not those who assembled it. And most importantly, the ownership over the gadget simply wasn’t present.

Needless to say, I let the girls abandon their partially-completed Drawdios to take apart old computers and design inventions of their own.

The Value of a Blank Schedule

As an entrepreneur, I’ve learned to embrace these moments of complete plan-scrapping – but it wasn’t easy at first. I was straight-up freaking out about running my first summer camp, not even one month after graduating from college. I had the camp’s itinerary nailed down to the hour, and ended up trashing the whole thing on the first day. I was starting to embrace the challenge of not knowing what the girls would want to learn or do the next day. Little did I know that the ambiguity, uncertainty, and doing-it-anyway that I face daily as an entrepreneur would shape the way that our classes run.

As the camps have evolved over the last year, the one thing that rings true for every camper as the best part of camp is freedom. The freedom to dictate your learning, and the freedom to build whatever you want to build. Electric Girls has embraced the importance of this freedom so much that we intentionally structure it into our programming – this is what I like to call “forced ambiguity”. We no longer prescribe any projects to our girls or tell them what to do. Instead, after learning a certain skill or concept, we’ll pose a design challenge: How can you implement a parallel circuit into a device that is somehow useful? 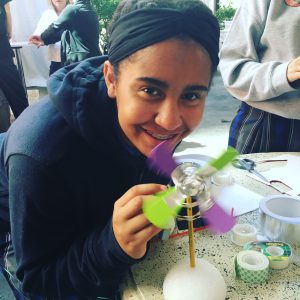 The results are astounding: an automatic dog feeder, a vibrating back massager, a bubble blowing machine – things that I would not have thought to prescribe as a project, and things that girls might dismiss as “too hard” if I had. And, the girls truly have ownership of these projects by witnessing their own success in completing a project that began as an idea.

Before ideating, designing, prototyping, and finally achieving those results comes the discomfort with the idea of not being told what to do. I have yet to witness a girl between the ages of 8-18 fail to overcome the initial discomfort that proceeds forced ambiguity. Sometimes it takes a few minutes, but at some point there is a transition from an idea in the mind, to an idea on paper, to a physical prototype, and so forth.

I’ve found myself “forcing ambiguity” in my own life in one way or another, trying to constantly embrace this blank slate mindset. It’s helped me communicate better with students, with other entrepreneurs in education and otherwise, and envision a better future. Without being constrained by plans, the status quo, or what I think I should be doing, I’ve found that I can achieve more and feel authentic doing so.

We can get stressed and uncomfortable when we’re thinking or planning for the future. Remind yourself to embrace that discomfort and to put that ambiguity to use. When I asked one Electric Girl last summer what she was going to invent next, she said “I think I need to just sit alone and ponder for a few minutes.” I think we can all learn to do the same.